This is the blog of seaweedman.nl 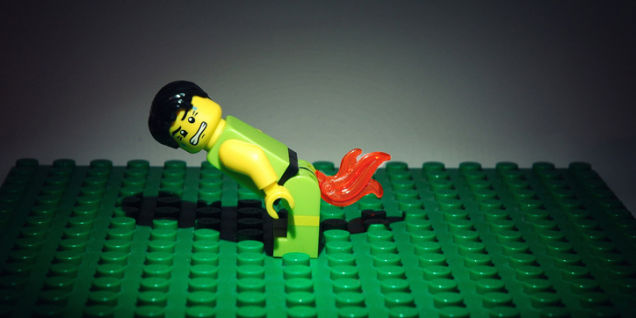 Fewer dangerous gas emissions: seaweed can do that!
Let’s face it: farts are one of the worst things in life. Not only can they destroy a romantic dinner, or a private moment between the sheets… They also cause global warming. Methane emissions from farting cattle are one of the biggest contributors to the greenhouse effect. Luckily, seaweed has a solution for that. And here it is: 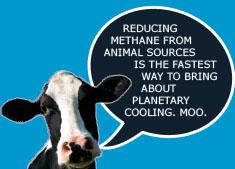 This cow’s got a message for us: Please feed me seaweed and I’ll stop farting methane!

Anyone seen Cowspiracy? or, Before the flood? Then you know, that the farts of our cattle contain a lot of methane. This greenhouse gas is 25 times more dangerous than CO2 when it comes to global warming, which could be disastrous to all of us, if we don’t take action quickly. So... what to do? should we all stop eating beef? Or is there another solution? Yes there is! And it’s called seaweed: 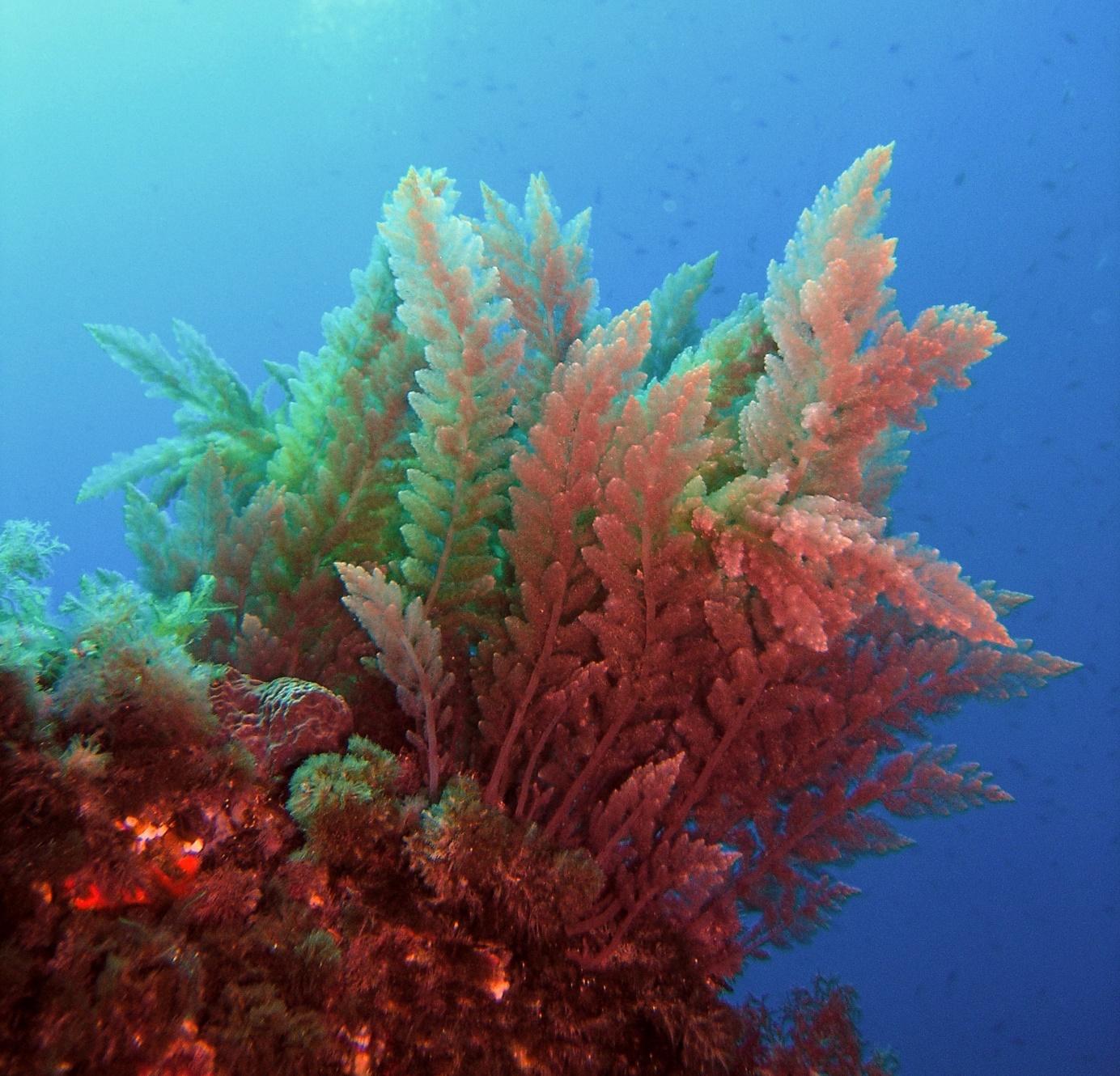 This seaweed, Asparagopsis taxiformis, can help us reduce global warming

The solution is plain and simple: If we feed our livestock seaweed, then it will stop producing methane. Researchers from Australia found that several species of seaweed significantly reduced methane emissions of cows, by reducing the numbers methane-producing bacteria in their guts. There was one seaweed species, Asparagopsis taxiformis, that could even stop methane production completely. And that’s not the only thing: Seaweed can also make cows – and other animals – healthier, while reducing the total cost of farming. Can you sea the future? 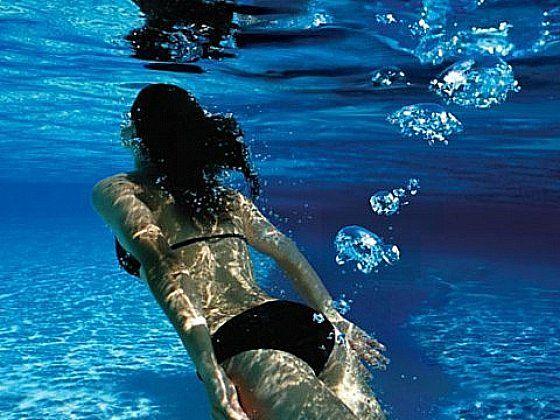 If we’d all eat seaweed, this would probably not happen…

Now that’s something interesting to tell during your next romantic dinner. And do you know what is extra interesting? What seaweed can do for cows, it could also do for humans. In terms of health. AND in terms of gas production. I am closely following some researchers on this topic. Stay tuned for more seaweed news!

What's so sexy about seaweed? 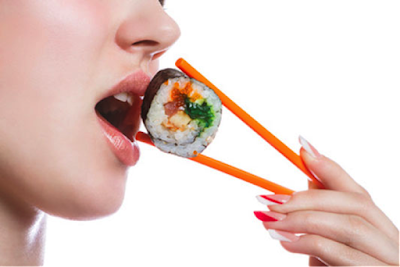 Contrary to popular belief, seaweeds have many sexy properties

When you think about seaweed, you probably don’t think about something cool, or funky, or... sexy. But why not? Seaweed is so much more than the wrap around your sushi. There are at least 2000 (!) different kinds of seaweeds, some of which have extraordinary properties.  So let’s dive a little deeper into this matter, and sea how seaweed can turn you on:

When it comes to size, seaweeds are always bigger than their friends in the ocean. To estblish whether a marine vegetable is a seaweed or not, you can use the following rule of thumb:  can I grab it with my hands? If so, then it’s a seaweed. If it slips away, then you’re dealing with micro (=small) algae. That’s why seaweeds are referred to as macro(=large) algae. There are seaweeds that can grow over 200 feet in lenght. Now that’s huge! 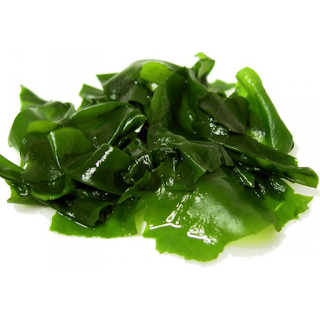 Dried Undaria pinnatifida (more commonly known as wakame) can swell up to 10x its original size when soaked in water.

Most seaweeds that are sold in the supermarket, are dried seaweeds. These vegetables can be kept for 3 years, without loss of nutritional value. Impressive, huh? But even more impressive is their swelling capacity. Some dried seaweeds can grow 10 x their own size when you cook them. However, in order to do that, they first have to get wet: The fibers in the dried seaweeds will then fill up with water, resulting into a swollen piece of vegetable. Bon appetite!

It likes to rock

Seaweeds are among the fastest growing plants on this planet. However, to become world champions in gaining bioamss, they need a few things:  First, the seabottom must be rocky, so they can hold themselves and stay in place. And second of all, they need some serious currents or waves every now and then. Why? Because this wild water will make them ‘dance’ towards the nutrients in the water that they need for optimal growth. So you can truly say that seaweeds like to rock the ocean floor! 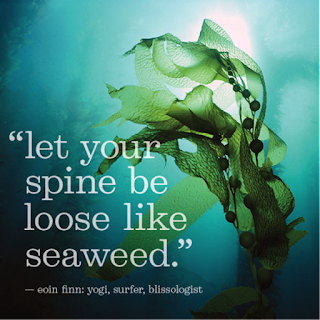 The seaweed in this picture is Macrocystis pyrifera, also known as Giant Kelp. It can grow up to 200 feet, and still it likes to rock!

So as you can see, there’s a lot about seaweed that actually makes it quite… well sexy. But the story doesn’t end here. There is so much more about seaweed thay you probably would like to know. For example, did you know you can make seaweed taste like bacon? More about that in next week’s newsletter… 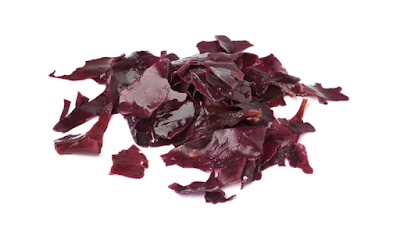 One of the wonders of the seaweed world is Palmaria palmata. This species, more commonly known as dulse or dillisk, has one extraoridnary property: you can make it taste like bacon. And there’s more good news: you don’t need to be a star chef in order to do so. Want to learn how? Read on!

There are a few things that make bacon taste like bacon. First of all, there’s the protein content. Bacon contains about 30% protein. And – surprisingly - so does dulse. Second is the umami flavour. What? Well, it’s a kind of fashionable way to say ‘savoury’. Just like bacon, dulse naturally has a lot of umami. The only thing you need to do to make it come out, is to heat it up.


Fat is your friend

But then, there’s one thing in which bacon and dulse are not alike: fat content. While bacon contains about 40% fat, dulse only has 2… So to make Palmaria palmata taste like bacon, you need to add fat. This seems like an unhealthy problem, but… Why not choose for good fat? Olive oil, coconut oil and– my personal  f(l)avorite - sesame oil -  are great ways of enhancing the lipid content and flavour of your meal. 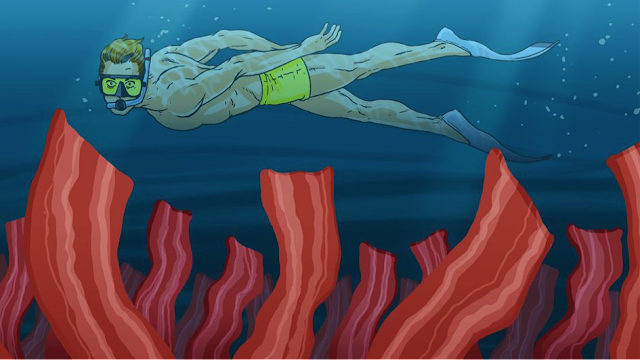 Ever dreamed about snorkelling amongst bacon? That dream can be real!

So to make dulse taste like bacon, there’s only 2 things you need to do:
1) choose a (healthy) oil.
2) bake the Dulse in it. Just for a minute or 2.
When you see the colour start to change from dark red to lighter red, then it’s ready. Great to eat with fried eggs, in salads, with pasta, or… well, anywhere.